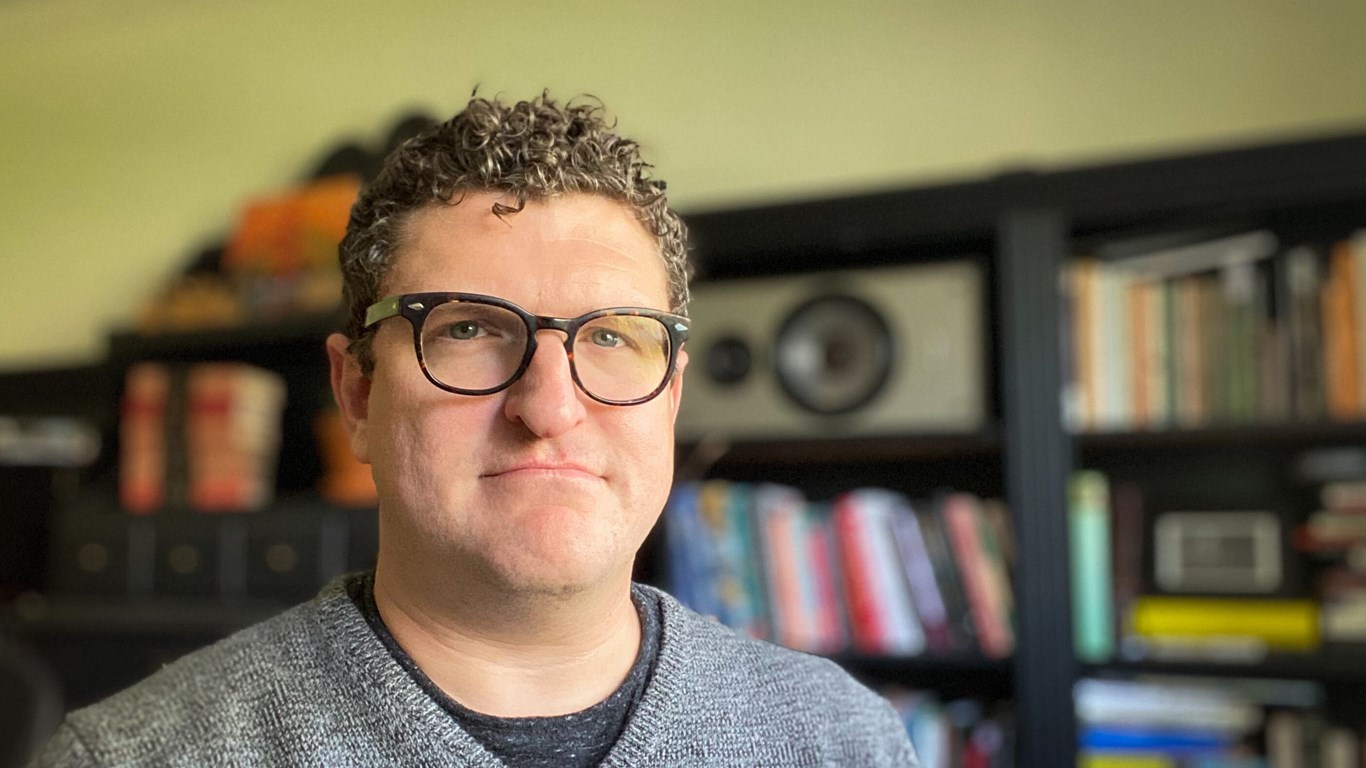 Mike Cosper grew up in a home of music and radio. He remembers his parents playing NPR “non-stop,” listening to hours of “Prairie Home Companion.” He toured with musicians thanks to his guitar, pedal steel, and dobro skills and was part of a worship band that put out an album in 2006 that sold 100,000 records.

But it wasn’t until 2016 that he put out his first podcast, “The Devil and Deep Blue Sea.” The show sought to discuss the fraught issues of religious liberty through narrative journalism. The podcast profiled Cosper’s art gallery in Louisville that ran into hostility from neighbors who didn’t agree with their convictions.

“At the time I was making this, I was trying to think how you connect with and serve with Christians who aren’t necessarily engaged in other kinds of media,” said Cosper.

In conversations he had with people at his church, he learned they didn’t necessarily read news media or Christian publications. They listened to the radio, watched cable TV, and listened to “tons of and tons of podcasts.”

“Podcasting seemed like a way to help to help people who were underserved by existing Christian media resources,” he said.

Ultimately, “The Devil and Deep Blue Sea” didn’t raise enough funds for it to expand past the pilot. But five years later, Cosper says he still hears from people who ask him when he’s launching the entire series.

That vision landed Cosper a job in 2020 as Christianity Today’s director of podcasting. In a little over a year, he and his team have launched six podcasts and have two more on the way.

Including Quick to Listen—CT’s weekly current events’ podcast and first foray into the medium in 2016—podcasts across the ministry received more than one million listens in 2020.

“At CT, we are after something that is winsome and constructive as opposed to reactive, realistic as opposed to triumphalistic,” he said. “In this year there has been an emphasis in dealing with stuff that’s weighty in terms of pandemics and deaths and suffering and loss. That’s been somewhat purposeful. That’s the season we are in as a culture. That’s reflective of CT in terms of understanding what time it is and how we want to respond. My hope is that we tell stories that are beautiful and compelling and move hearts and stir emotions in ways that are really formative.”

For one British listener, Cosper and his team are already succeeding. At the end of the first season of “Adopting Hope,” an interview podcast hosted by two adoptive moms, Rachel Reay wrote in to say that she had listened to each episode of the podcast and “found it so encouraging and uplifting.”

“I am blessed with having Christian friends who have adopted and who foster but we don't have so many Christian adoption resources in the UK and I think there are stricter privacy recommendations around protecting your family and child's identity so people can't or don't necessarily share their personal stories so much online,” wrote Reay. “My husband and I have two birth children and we are in the introductions process to adopt a little girl who is nearly two. …The podcast has carried me through the highs and lows and fears and impatience over the last few months.”

Want to learn more Cosper’s additions to Christianity Today’s podcast collection? Here’s what he says about them in his own words:

Prayer amid Pandemic: In response to the outbreak of the pandemic, I worked with Morgan Lee to develop this podcast, which explores how Christians have responded to disease outbreaks across the centuries. I think everyone should listen to it. I’m really proud of what we did with that show. We kind of dived in with both feet.

Adopting Hope: For folks that are experiencing life as an adoptive or foster parent, “Adopting Hope” has covered an incredible variety of families and circumstances. You’ll find a lot of common experience and encouragement there.

Surprised by Grief: Good pastoral work is always about preparing people for their encounters with death. It’s a topic we typically don’t want to face straight on but it’s something that every Christian is going to face in one form or another. The show will be especially profound for people who are experiencing loss.

Art of Pastoring: What’s been great about that show is that you have two guys hosting the show who are seasoned without being disillusioned or embittered. I think it’s a constructive show where pastors who are weary are going to find a lot of empathy.

Cultivated: This podcast explores themes of meaningful work and faithful presence through the stories of a variety of individuals. Episodes have featured writers, politicians, scientists, artists, and theologians from many corners of evangelicalism. It’s framed as a show about faith and work. In reality, it’s about faith and presence and how we show up in the world and contribute in ways that are constructive and that advance the kingdom and loving our neighbors well.

Steadfast: Singer/Songwriter Sandra McCracken’s podcast is great for people on the other side of the pandemic. What have we learned through this experience? How can we move forward with an understanding of God working through suffering and difficult circumstances in ways that are still full of loving and tender care?

The Rise and Fall of Mars Hill (Coming May 2021): It’s narrowly about Mars Hill Church but more broadly it’s about the culture, power, and celebrity in North American evangelicalism. The hope is that we tell this story in such a way as to invite the church to something better and more beautiful moving forward. Something remarkable and powerful happened at Mars Hill, and the tragedy of it only makes sense if you understand the transformative beauty of what it was.

Beautiful/Terrible (Coming May 2021): The name comes from the Frederick Buechner quote, “Here is the world. Beautiful and terrible things will happen. Don't be afraid.” It is hosted by Bob Crawford from the Avett Brothers, singer/songwriter Liz Vice, and North Carolina pastor Chris Breslan and asks how God redeems the difficult circumstances of our life. Similar to “Mars Hill”, this is a high production show.