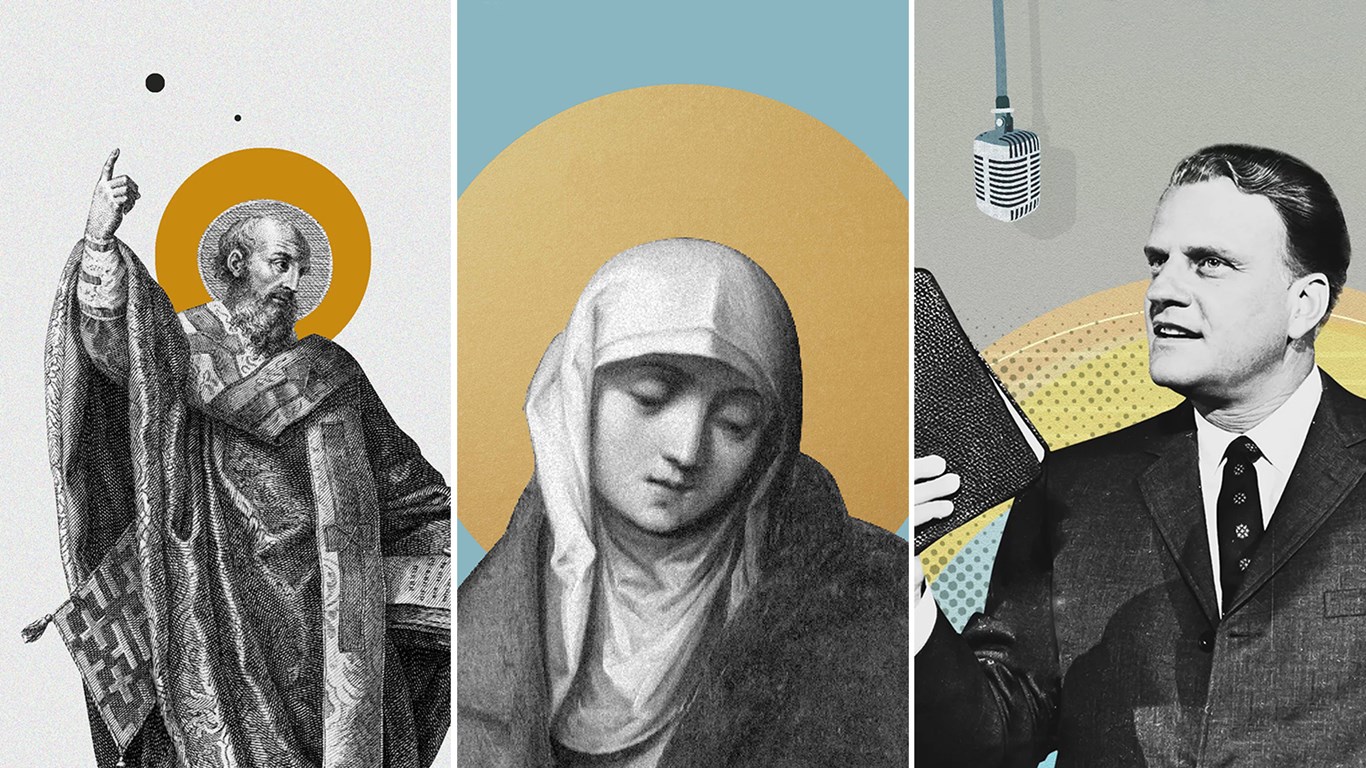 Designers tell stories of Christians around the world.

CT Magazine has commissioned artists to create original illustrations and paintings for the magazine for nearly a decade. And, just in the last year, designers and freelance artists created around 50 illustrations for CT.

Art Director Sarah Gordon illustrated Mary at Pentecost for the December 2019 cover, appearing with the headline “The First Christian” and resulting in over 18,000 visits to Christianity Today’s website.

“You never see Mary at Pentecost” said Gordon. Our nativity set growing up showed Mary in a blue robe. The article celebrated her as a believer and felt informative and inspiring to my faith. For the cover, this image was always what I had in my head.” 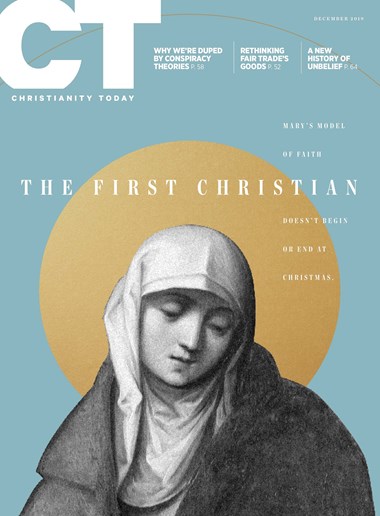 Mary is depicted on the cover with a golden halo and a shade of “Marian Blue” as the primary background color. The cover and images were printed with gold metallic ink.

“Our decision to treat Mary with reverence using the classic blue and gold from traditional iconography was directly in line with the article itself,” said Alecia Sharp, Creative Director at Christianity Today.

In the cover story, author Jennifer Powell McNutt wrote, “Mary is not a Christmas figure to be stored away like the manger and the star of Bethlehem until next year. She played an extraordinary role throughout the life and ministry of Jesus, from the Annunciation to the day of Pentecost.”

Gordon’s illustration of Mary at Pentecost points to a longstanding tradition of writing (or painting) religious icons in the Eastern Church tradition. Icons are often called “windows to heaven” or “doorways to the sacred,” according to an article “Icons as Religious Art” from Loyolapress.com.

Rowan Williams, former Archbishop of Canterbury said “We, watching and waiting for Christ to come more fully to birth in us, are waiting for our lives to become ‘iconic,’ to show in their colour and line and movement how God acts, Christlike, in us” in a book entitled Ponder These Things: Praying with Icons of the Virgin. 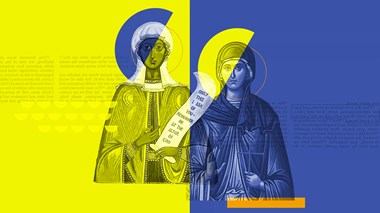 Gordon worked at a church during her college years that subscribed to CT Magazine. Her grandfather, V. Gilbert Beers, was a Lead Editor at CT from 1982-1985.

When asked about iconography, Gordon said, “I like that particular style and the way iconography depicts biblical scenes, probably hearkening back to when I spent a semester in Italy and a lot of time around frescoes and icons.”

Mary has appeared on the cover of CT three times, once in 2011 (as an image of “The Adoration of the Shepherds by Guino Reni), and in 2006, for a cover story with the headline ”Incendiary Mary: Dictators Dreaded What the Mother of Jesus Had to Say” but never in the form of an illustrated icon.

For an article entitled “The Psalms Dare Us to Bring Our Whole Selves Before God,” Gordon designed a collage illustration–an article written by Tish Harrison Warren that was shared 460 times on Facebook.

One reader responded to the article on Instagram, “A great reminder to be reading all of the Psalms—not just the ones of praise and worship. The Psalms of lament are some of the most powerful passages to me. The way the Psalmists freely expressed their grief and doubt in God is key to letting me know I’m not alone.” 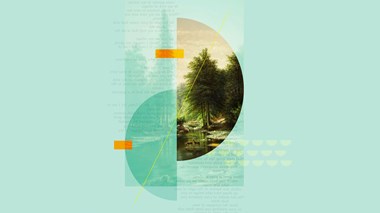 Gordon used a photo of Ferdinand Richard’s oil on canvas painting of the California redwoods, as the basis for her illustration. She wanted to answer the question “what does it mean for women to love their Bible” in this illustration. The painting resides at the Bowers Museum in Santa Ana, CA.

This article is part of “Why Women Love the Bible,” CT’s special issue spotlighting women’s voices on the topic of Scripture engagement. The half circle images “play off of the half circle tabs” you see in some Bibles.

Gordon explained some of her design process, “I first spend time thinking about the concept and how to represent that visually. I do a lot of brainstorming and research, including word associations and imagery searches.”

Design Assistant Mallory Rentsch, who started at CT in 2019, designed a collage illustration of Mother Teresa, Florence Nightingale, and Charles Spurgeon in black and white for the collection of articles, “Many of the Christians We Remember Faced Pain and Sickness,” detailing the ways that plagues, disease, and physical suffering impacted believers’ faith. 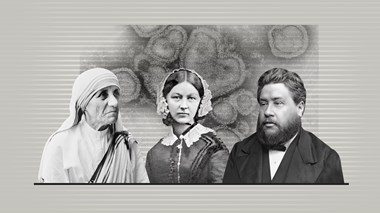 Rentsch described her creative process for this collage illustration. “This topic was discussing big names in the faith and their experience with disease. I wanted to represent a few of the most important individuals written about. From there, I decided to pull in an image of a virus or sickness to represent the struggle these individuals endured. At the end, I usually tie everything together with a textural element as seen in the striped background.”

Rentsch attended the American Academy of Art in Chicago, where she earned a BFA in Illustration. Soon after graduation, she taught art classes at Kaleidoscope School of Fine Art, and later was hired by CT and started creating illustrations to accompany CT editorials. 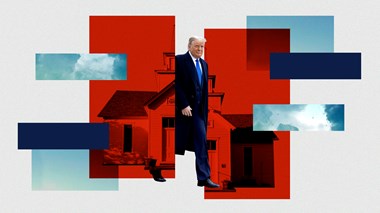 She has created around 100 illustrations since she started at CT over a year ago. Rentsch designed an illustration for an article entitled “Why Evangelicals Disagree on the President” by Timothy Dalrymple that resulted in over 360,000 visits to CT’s website and 100 comments on CT’s Instagram page, with an endorsement from evangelical author Ann Voskamp.

Rentsch said “For illustrations, I’ll usually come up with ideas and a few sketches for them–and show those to the art director.” After that, the art director offers feedback on their favorite ideas and whether the ideas need to be refined. 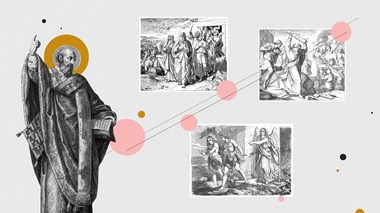 Rentsch also illustrated Cyril of Jerusalem, a fourth century bishop who delivered catechetical lectures that outlined the essentials of the Christian faith. She created this as a digital collage illustration for an article entitled “God’s Mercies Aren’t So New.”

When asked about the role illustrations have played for CT, Rentsch said “Illustration has always been implemented in some way, shape, or form in the magazine.”

Some of the earliest magazine articles for CT included a little cartoon resembling a comic.

“Illustration is visual communication through pictorial means. Its Latin root, lux, means “to shine light upon”–to enable understanding,” according to History of Illustration, the first textbook of its kind about illustrations. 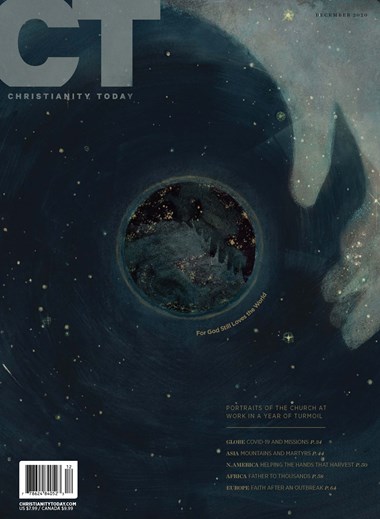 Freelance illustrators that design for CT have also created illustrations for The New York Times, The New Yorker, and other prestigious magazines and agencies.

Since March 2020, the COVID-19 pandemic has left a lasting impact on countries around the world. For CT’s December 2020 issue, it was important to shed light on God’s presence in the world, according to Gordon.

“We really wanted that issue to make the reader feel like God is there. I liked how Dorothy Leung’s illustration was a little more subtle and abstract.”

Dorothy, an illustrator from Toronto, Canada designed the cover for the December issue.

“This is beautiful and so comforting. You are so gifted in bringing intangible things to life,” said one Instagram follower of Dorothy’s.

Her illustrations have appeared in The Washington Post, NBC News, and Imprint Magazine. 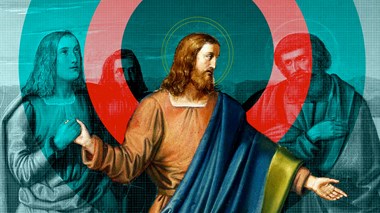 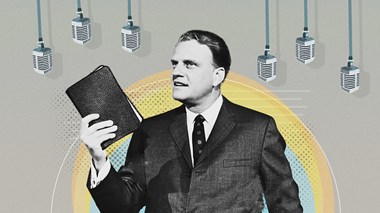 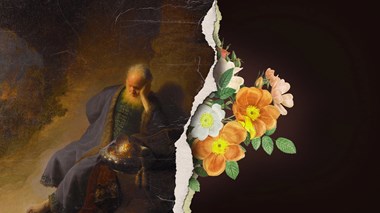 He has illustrated Jesus, CT’s founder Billy Graham, Donald Trump, Martin Luther King, Jr., and the Hillsong worship band. He has also illustrated God’s creation in nature, theological questions like how to understand God’s judgment in the Old Testament, and issues affecting the church and culture.

Szuecs said “I really enjoy the challenge of working on an illustration that represents different ideas from an article, creating something visually appealing that will spark the reader’s curiosity.”

“A recent illustration brought together themes as diverse as Groundhog Day, the Super Bowl, and Candlemas. I don’t think anyone can imagine what these subjects have in common; but, in creating an illustration in which these elements appear in harmony, my desire is that the reader will be even more interested in the article, to go beyond the title and read the whole story to the end.” 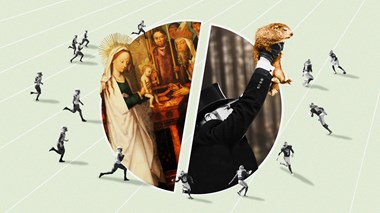 CT Magazine has a history of partnering with artists, designers, illustrators, painters and musicians to tell stories of Christianity around the globe. Complex subjects like politics, theology, God’s mercy, or even a liturgical holiday like Candlemas are easier to understand, in the context of a visual illustration.

CT currently has six people on the design team, plus a few freelancers.

Sharp said “Over time, we’ve developed a range of ways to stylize historic works that we feel helps readers look at these works anew. Our hope is that readers will pause, consider the meaning, and develop an even deeper understanding of the religious figure or the event the images represent.”