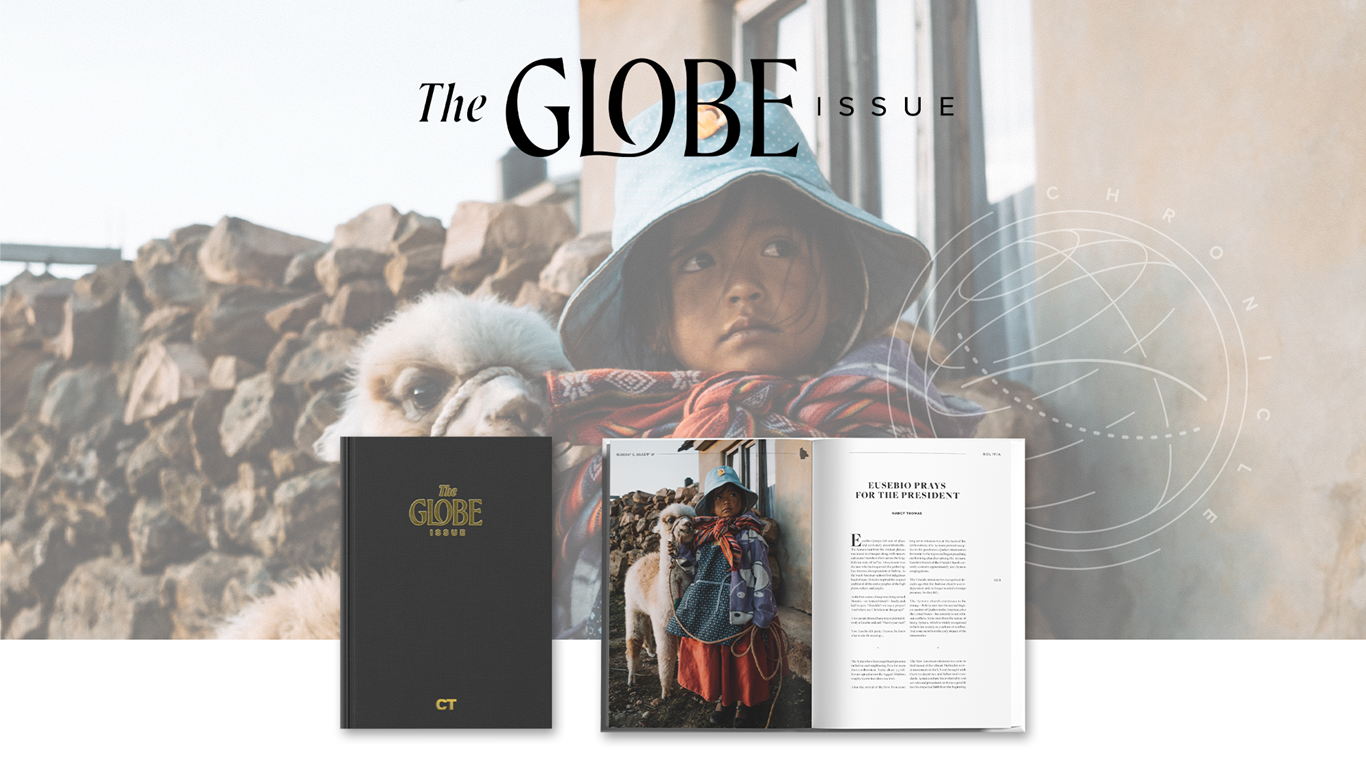 The Globe Issue, CT’s newest endeavor, immerses readers in the stories of how God’s people are shaping their communities worldwide.

When Timothy Dalrymple, Christianity Today’s president and CEO, joined the ministry three years ago, he shared a vision of how he believes CT is called to be a storyteller of the global church. That vision sparked the idea for The Globe Issue.

To tell the stories of the global church is a major undertaking. Finding and sharing stories from Christians around the world has taken nearly a year. By engaging with organizations like World Vision, International Justice Mission, and OMF International, inquiring about the stories they were hearing on the ground, Conor Sweetman, creative lead for special projects, was able to connect with international seminaries, local ministries, and individual followers of Jesus all around the world. Once connected, Conor set up a way for people to send in personal essays that told stories of what it means to be a Christian in their specific corner of the globe.

From the beginning, the goal of The Globe Issue has been different than that of CT magazine. While Christianity Today focuses on informing its readers, The Globe Issue offers readers an expanded spiritual and emotional lens and a capacious, captivating vision of how men and women are following the call of Christ all around the planet.

The look and feel of The Globe Issue will be different from CT magazine as well. The deluxe hardcover edition will be a linen-bound, gold-embossed coffee table book that is available for preorder now and will ship in September 2022. The digital component of The Globe Issue includes expanded visual elements like striking photographs from around the world, audio components in the stories, interactive illustrations, and more.

“All of the new elements aim toward immersive and new platforms and ways of storytelling,” Conor said. “We take telling these stories seriously, and all the technological aspects aid that.”

Conor went on to explain how one of the goals with The Globe Issue was to try new and exciting ways to convey narrative. With his work on Ekstasis over the years, Conor brought a focus to The Globe Issue that elevates a poetic and artistic storytelling experience.

Contemplations are stories told through the eyes of the person writing them. These come from personal experiences and reflect on the inward journey of faith. Chronicles are written by a third party, offering a broader contextual look at stories unfolding in the communities around them.

After spreading the word about the project over the course of three months, Conor received more than 100 story submissions from more than 30 countries. From that point, it was a meticulous editorial process to figure out what would eventually make it into The Globe Issue.

In the end, the editorial team included 20 stories from 18 different countries around the world. Conor explains,

My hope for The Globe Issue is that it will share stories across the world, where the work of missionaries, organizations, and individuals is seen in their small examples of the grandeur of God, where they are the opposite of trite or cliché. They are beautiful. We should train ourselves to be drawn to them. We can easily dumb things down and make them into sound bites, but God is working dramatically across the world, and he is so much bigger than what we see around us.

The work of The Globe Issue will expand the work CT is doing around the world. It tells the stories of the global church through voices based around the world, even as CT grows a global presence through hiring globally focused staff, such as a new a global storytelling journalist and a CT Asia editor to expand its global reporting footprint. CT also continues to grow its translation efforts.

You can experience The Globe Issue for yourself by visiting Globe.ChristianityToday.com, where you can view the articles online or download a digital copy, or by preordering the deluxe hardcover edition.

We hope you enjoy this dazzling glimpse of the depth and breadth of the kingdom of God all around the planet.

Caitlin Edwards is marketing and sales manager at Christianity Today.

How CT is Helping Christians Around the World Tell Their Stories