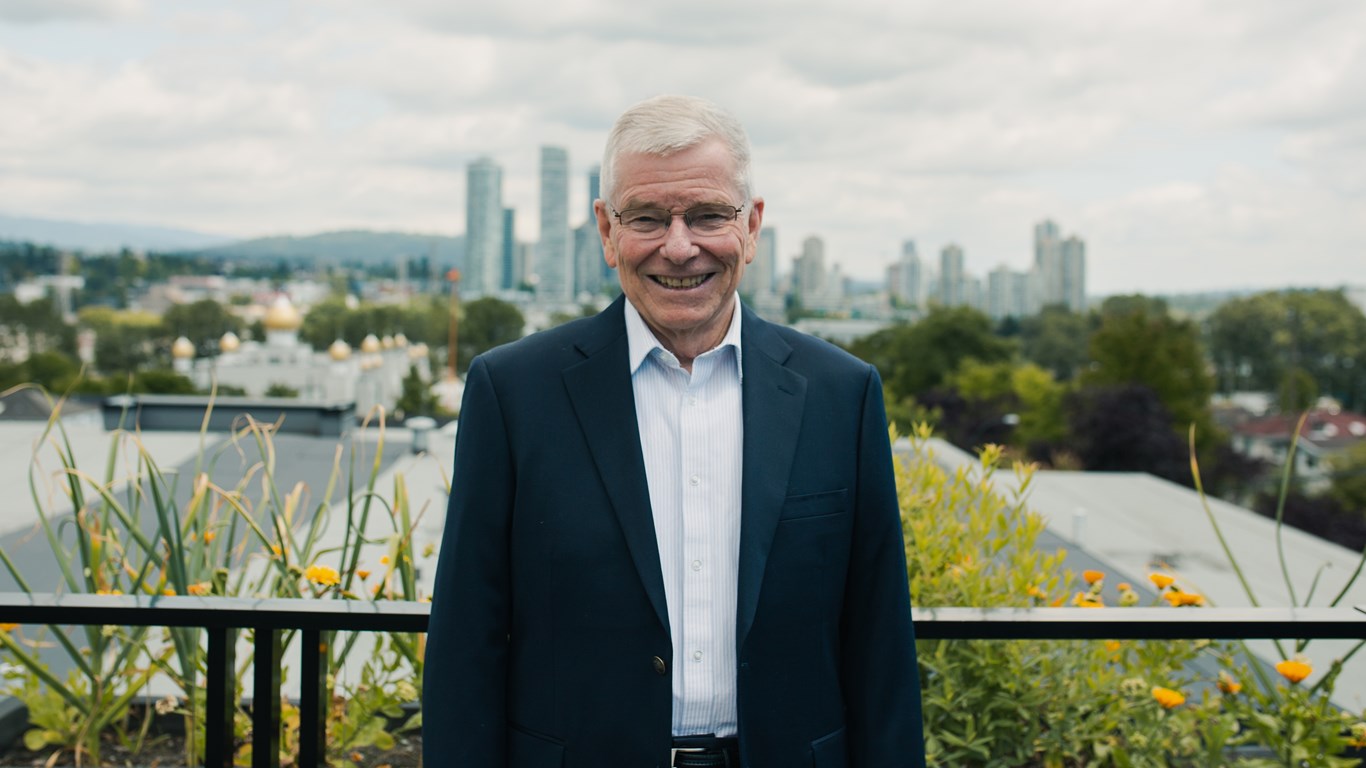 Image: Photo Courtesy of Darrell Johnson
“I do not know of any other resource that is seeking to understand the world and the gospel in the ways CT is.”

Perhaps it’s fitting that for more than 20 years, Darrell Johnson has made Vancouver, British Columbia his home.

“I was born in Duluth, Minnesota—so I'm one of those Americans who from an early age knew Canada existed,” said Johnson, a long-time pastor and professor at Regent College.

Johnson’s ministry began in California, took him as far away as the Philippines, before ultimately landing his family in Vancouver. But it was his Swedish grandmother, who Johnson lived with at various points in his childhood, who started the whole thing.

“She spoke of Jesus in such a compelling way,” said Johnson. “She loved her Bible. Even when I was three years old, she read her Bible to me, with her broken Swedish accent.”

Later, the love of God that his grandmother had cultivated led Johnson to respond to an alter call as a 10-year-old. But after making his way down the church aisle, his mother appeared by his side to lead him away, spurred by his father’s fears of a predatory preacher. During most of his adolescence, Johnson kept up a quiet faith, attending church with his family, but keeping church life at arms length. Then, Martin Luther King Jr. was assassinated on April 4, 1968. As the radio stations played King’s sermons through the night, Johnson knelt and prayed.

“I said, ‘Lord Jesus, I would love to be able to preach you in such a way that lives are changed,’” said Johnson. “That was the moment of surrendering to the call.”

After attending seminary and serving a Presbyterian Church (USA) pastor at several California congregations, Johnson moved across the Pacific Ocean to lead Union Church of Manila in what he now calls his “richest time of ministry.” He arrived in 1985, as the country was in the midst of toppling a dictatorship in what became known as the People Power Revolution.

“I saw 3 million Filipinos demonstrate that the Sermon on the Mount is the only way to live in this world. They took Jesus’ call to nonviolence seriously,” he said. “I saw how the kingdom of God does break into the world through humble, meek people.”

After several years at Union Church, a majority international congregation that served many diplomats, multinational corporation executives, and missionaries, Johnson returned to California for the next decade. Then, virtually out of the blue, Regent College invited him to join their faculty. He and his wife Sharon, and three of their four children moved into what was a very different place than they assumed. (The Johnson adopted their children from the US, South Korea, the Philippines, and Russia.)

“At the beginning, it took us a while just to get used to the fact that Canada is different than the United States, learning to understand the Canadian view of the world and the Canadian way of being Christian,” he said.

Johnson served nearly a decade at Regent before becoming a pastor at the historic First Baptist church in the downtown core of Vancouver. He stepped down after suffering a heart attack and today spends much of his time mentoring other pastors and writing, recently finishing a book on Ephesians and is currently in the midst of a new work on John.

Johnson became a CT subscriber as a seminary student, just several years after the publication celebrated its first decade of existence.

He was immediately captivated by its news section and by its biblical exposition pieces. Today he praises the Testimony section, the last page of the print magazine, where individuals share the specific story that led them to Christ. Johnson credits his longevity as a subscriber with CT’s thoughtfulness.

“I earned my undergraduate degree in physics in theoretical mathematics so I didn't learn how to write well before going into ministry. I have learned so much from the way CT articles are carefully crafted and thought out,” he said.

Its global focus has also kept him captivated.

“I appreciate reading reports from Africa, Asia, Europe, including reporting from behind the Iron Curtain in the midst of the Cold War,” he said. “The church in the states, and, to some degree, the church in Canada can be inward focused so it’s important to broaden the vision and remind people that God is active and the church is growing all over the world.”

Stephanie McDade’s How Could All the Prophets Be Wrong About Trump?

“That, to me, was one of the most disturbing dimensions of the last five years in the political realm. For CT to take that on and do so so carefully was a great blessing.

“An example of the capacity to face tough issues and deal with them. A model of how to talk about ‘the stuff’ that happens in the church, not by playing games or being condemning but by dealing with the truth. The courage to deal with the issues before us and to do that with grace and truth.”

CT CEO and President Tim Dalrymple’s recent piece on the Splintering of the Evangelical Soul:

“Tim articulated the nature of the divide without putting down anyone in the process. He wasn't trying to be conciliatory; he was seeking to name the dynamics of the tension. I admire his capacity to name what we're facing without a condemning or judgmental spirit. Timothy’s capacity to see the big picture and articulate it is marvelous. He's such a careful thinker. He has an amazing gift with words.”

While CT is an American publication, Johnson believes it is deeply relevant for Canadian pastors and ministry leaders.

“When I first heard the phrase Beautiful Orthodoxy, I thought I might have gone with words like courageous or compassionate. But the more I’ve thought about beautiful, the more I’ve realized that it really works for Canada,” said Johnson. “The word evokes the worship orientation of the faith and has a more inviting posture towards the world. Who doesn't want beauty? The search for beauty is all around us. At least in Canada, what will attract people to Jesus is something irresistibly good, lovely … beautiful.”

Johnson often encourages those he mentors to subscribe to CT.

“CT has always been in touch with what's going on in the church in North America, but there's a greater depth now. CT is there in the face of all that’s going on in society now,” said Johnson. “CT is an advocate of the truth and grace and wholeness that we have in Jesus.”

“Under Timothy's leadership the ministry, which has always been deeply thoughtful, has moved to even deeper levels of insight to, and engagement with, what we are facing in discipleship and ministry today.”

For those who might also consider doing the same?

“I do not know of any other resource that is seeking to understand the world and the gospel in the ways CT is,” said Johnson.

Why One of Christianity Today’s Longest Subscribers Is Still Reading